Your valuable comments and suggestions about the website or its contents are welcome.
They may be published if found appropriate.

Awards
Father Felix Raj is the recipient of :
2020
Xavier Ratna Award for his service to education, presented by the Xavier Institute of Engineering, Mumbai on January 11, 2020 in Mumbai.
2020
Father Felix Raj was honoured with the Rotary Award for Excellence by the Rotary Club of Calcutta Metropolitan on March 7, 2020 at Conclave, Kolkata.
2019
Hall of Fame Award presented by the Institute of Certified Management Accounts (ICMA), Australia on December 16, 2019 at SXUK during an international Conference on "Frontiers of Accounting".
2019
Educationist of the Year by Sankalp 2019 Education Award Forum, presented on September 1, at JW Marriott, Kolkata
2019
Mother Teresa Ratna conferred by the International Mother Teresa Award Committee on August 26, 2019 at ICCR, in Kolkata
2018
Nihil Ultra Award for Excellence by the St. Xavier’s College, Kolkata on January 16, 2018.
2017
Leadership in Institutional Excellence Award from Calcutta Management Association, at Hotel Hindustan International.
2016
SikshaRatna Award by the Government of West Bengal on 5 September 2016.
2014
BangaBibhushan Award by the government of West Bengal in 2014
2013
Maulana Abdul Kalam Azad Memorial Award by West Bengal Board of Madrasa Education in 2013
2011
Lifetime Achievement Award by Core Sector Communiqué in 2011
2008
MahdeolalSaraogi Award by Rotary Club of Kolkata in 2008
2008
First CAB Community Development Award by Catholic Association of Bengal in 2008
2006
Mother Teresa Millennium Award by Mother Teresa's International and Millennium Awards Committee in 2006.

Father Felix Raj was honoured with the Rotary Award...

2019: Hall of Fame Award presented by the Institute...

Fr. Felix Raj receiving the “Educationist of the Year”...

Fr. Felix Raj receiving the “Educationist of the Year”... 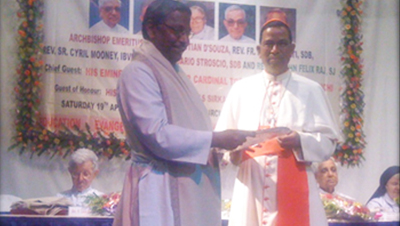 Commendation from the County of Alameda, State of California

Recognition from the City of Fremont, California

Educationist of the Year Award 2019

Excellence in Leadership Award from CMA 2017

Father ceiving the Shiksha Ratna from the Eduation Minister of W.B.

A Prophet for all Seasons dies:

Easter in the time of Lockdown:

7 Years on, Pope Francis remains son of his soil

The government can choose teachers in minority schools: criticism from Catholics

Jesuit from Calcutta: Mother Teresa, example for the school, 'temple of wisdom'

Saint of the slums with a universal message
Dr. John Felix Raj, SJ
Dr. John Felix Raj, SJ (born 1954) is a Jesuit priest in Kolkata, the City of Joy. He is Vice-Chancellor and a Professor of Economics at St. Xavier's University Kolkata. He is the former Rector 1996 to 2002) and Principal (2009 to 2017) of St. Xavier’s College (Autonomous), Kolkata. He is also the director of The Goethals Indian Library and Research Society.
Read More
Links
Links
Reach Us
Copyright © 2019 - 2020 | felixrajsj.com
Designed by Orbitech